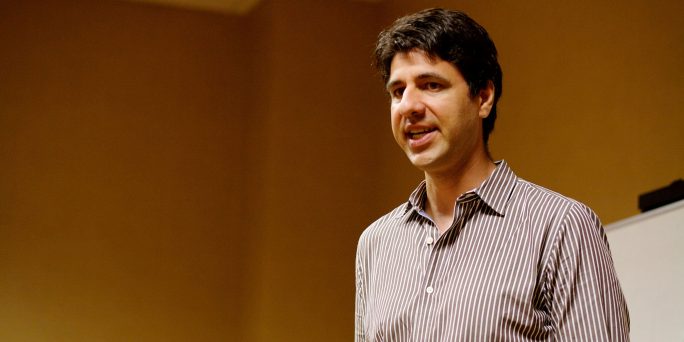 Sean is CEO and founder of Sterling & Stone.

He was born in Long Beach, California to a family of nuts. His first word was I have an idea. Around age 5, wearing a bowl haircut that 5-year-old Johnny had also been cursed with on the opposite end of the country, Sean decided he wanted to head out and sell balloons from the family flower shop on his own. His father was fine with this, provided Sean sold all his balloons before lunch. Sean seized this directive by finding one sympathetic man and telling him, “My dad says I can’t eat until I sell all of these balloons!” The man bought them all and that’s how this all started.

Sean’s childhood centered around working in the family shop, huckstering on the playground selling homemade G.I. Joe mutant mashups, and getting kicked out of Disneyland for shooting rubber pellets off the Monorail. Also playing with or being repelled by the weird shit his mom rescued from other people’s garbage. At some point he wore a Nintendosaurus sweatshirt and owned a carved wizard stick, meaning a stick with a wizard’s face carved into it, along with his name. It wasn’t Sean’s fault. His mother bought the stick and it lived in the closet. Much later there was an incident with a rusty donkey. You get the idea.

Life for young Sean was a series of entrepreneurial ventures. After years learning the flower industry, Sean began to co-run the family business, called Rainbows. He found new ways to improve it, approaching the flower shop with the same sort of creative thinking that drives S&S today. He bought and ran a successful stand-alone flower cart instead of finishing high school despite his guidance counselor’s assessment that he’d “never amount to anything without a diploma.” He expanded Rainbows, opening so many new locations at once in an attempt to corner the SoCal market that his future wife Cindy dubbed him “The Godflower.”

Ultimately, as with hair bands such as Journey and RATT, creative differences caused Sean to leave Rainbows and start a series of new businesses. But you don’t want to hear about those businesses, right? You’re here for the S&S story.

Originally, before there was a Sterling or Stone (though to be clear, there is still no actual Sterling or Stone) there was Sean and Dave. They began by writing tiny “Wee books” (yes, seriously) and doing sales copy for hire. Eventually they decided to get creative together and wrote their collaborative “different kind of vampires” series, Available Darkness. They followed it up with the post-apocalyptic saga Yesterday’s Gone, which punched the Internet in the dick and helped create terminology that’s become popular today: namely, writing serial-style “episodes” of a work which are then collected into larger groups called “seasons.” It re-awakened the art of written serials and catapulted Sean and Dave on their first big success.

Dave hung in there with all the entrepreneurial shenanigans you’d expect from a guy who sold candy on the playground instead of hanging on the monkey bars. But by the time Johnny came along to hop on their bandwagon and start the long-running Self-Publishing Podcast (now The Story Studio Podcast), Dave was eager for Sean to find a replacement. Dave wanted to write, but Sean wanted to BUILD. Johnny also wanted to build, so management of the whole of S&S (as opposed to just the books it wrote) fell to the dream team of Johnny and Sean.

The story of Sterling & Stone is long and winding — and far too involved to detail here. The important things to know (after the three partners joined forces in a manner not unlike the gathering of The Fellowship of the Ring) are that we began as two pairs of co-authoring storytellers (Sean and Dave / Sean and Johnny), detoured into providing a ton of “writer education,” then trimmed our educational branches to twigs and got back to being the storytellers we were always supposed to be.

Along the way, we launched a 200-person conference and a mastermind group, birthed a collaboration-for-hire service, ran in-person retreats and online bootcamps, started and abandoned a dozen additional podcasts, co-created authoring and worldbuilding software, launched the most successful fiction Kickstarter campaign ever at the time (Fiction Unboxed, wherein we wrote a novel from scratch in 30 days while a live audience watched), and a whole lot more. The company ballooned, then contracted to a solid core once our sideline experiments shut down.

(Not that the paltry lot above comprised the whole of Sean’s I have an idea! nature at the time. Far from it! Experiments Johnny managed to put the kibosh on during this period include Sean’s plans to start a subscription box service, develop customer experience software, open a factory that made cannabis butter, and assemble blinds in Manila. Only one of those isn’t true.)

These days, Sterling & Stone is a Story Studio, plain and simple. Which, as it turns out, isn’t always plain or simple. We have more than a dozen writers working at the time of this bio and a rather “interestingly complex” set of systems to make our story-creation work from end to end — from blue-sky brainstorming in our biweekly story meetings, to outline development in which Sean almost always has a hand, to writing, to course-correcting and revision, to post-production, training, development and all the other secret sauce behind our virtual walls.

We mainly create fiction these days, but a portion of our books will always include nonfiction meant to change minds and change the world. It’s not just books that we produce, though. Story takes many forms — and as the 2020s roll on, S&S will increasingly delve into the worlds of television, film, audio, graphic novels, video games, other transmedia ventures.

In all of this, Sean is both leader and cheerleader. He’s the engine behind S&S’s enthusiasm and the buoy beneath its spirit. While Johnny focuses outward (he’s much better preaching than teaching one-on-one), Sean focuses inward. He builds the team and keeps it happy. He tends the flock, making sure all needs are taken care of, often at the expense of his own.

Every ship needs a captain, and Sean is ours. He lives in Austin, Texas with his wife, two children, dog Fisher, and more than his share of nose. He can often be found eating copious amounts of barbecue.