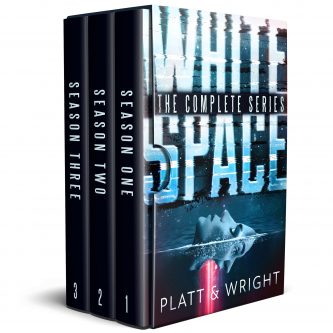 From the authors of the bestselling series, Yesterday’s Gone, comes the roller coaster ride of a sci-fi serial thriller, WhiteSpace: The Complete Series. Here for the first time, all three seasons of WhiteSpace have been collected into one convenient box set for your reading pleasure.

Hamilton Island looks like the perfect home. Maybe it would be, if it wasn’t filled with tomorrow’s nightmares…

The Puget Sound bedroom community has it all — beautiful homes with white picket fences, a thriving tech sector, and one of the best school systems in the state.

But not everything is as it seems.

People on the island go missing all the time.

Its residents are being watched.

A covert surveillance and mind control program, missing children, transhumanism, clones, and murder are all part of a secret agenda that could determine the fate of humanity in this stunning series finale of the smash sci-fi thriller series.