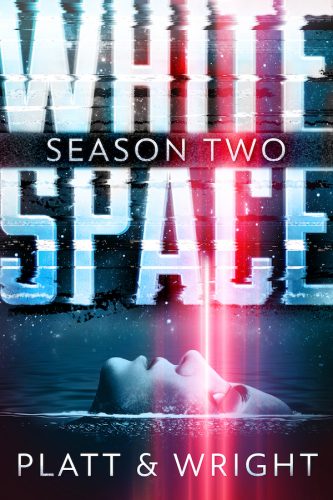 From the authors of the bestselling series, Yesterday’s Gone, comes the roller coaster ride of a sci-fi serial thriller, WhiteSpace: Season Two.

The quiet bedroom community of Hamilton Island just recovered from a school shooting that rocked the community. But, as it turns out, Roger Heller didn’t act alone.

He was part of something bigger …

A conspiracy of scientific experiments, missing people, and ancient secrets that threaten the island and its people.

And behind it all, the enigmatic transhumanist icon, Blake Conway.

Can Jon Conway piece the mystery together before it takes another of his loved ones?

Can the Heller family move on from the actions of Roger Heller?

Will Cassidy’s drug addiction destroy the new family she is building with Jon and Emma?

And what will happen when Brock Houser begins to launch his own investigation into the strange goings-on?

★★★★★ “I was so totally in love and enthralled by Season 1 of WhiteSpace and could not imagine how it could get better, but it did! LOVED, LOVED, LOVED Season 2. Read it in about 3 sittings (to the exclusion of alot of housework and maybe even some work AT work…I’m not admitting anything!). Could not put it down.” — Jkaustin02

★★★★★ “This season confirms to me what Season One made me suspect – while I know Yesterday’s Gone, by the same writers, has a big following, and I too loved it tremendously – WhiteSpace is officially my favorite! I’m so invested in the characters, I just can’t wait for Season Three!!” — lxiny

★★★★★ “I am an avid fan of Sean Platt and David Wright. I love their books and of course I’m a Goner. There are so many twists and turns that I find it difficult to stop reading. I have to force myself to stop and live my life. I am desperate to read Season three. The final twist at the end of the book was awesome.” — Adrienne F Ryans

★★★★★ “Absolutely loved this series, think Whitespace is now my favourite… Was yesterdays gone….(or possibly they are equal favourites) Truly couldn’t put either of them down. Love all the characters, and the way each chapter finishes with a bang…” — Tracie09

★★★★★ “My problem with these authors is that I don’t have nearly enough time in the day to keep up with all the books. I started with Yesterday’s Gone and got hooked, now I’ve downloaded the next seasons and have not been able to get back to YG because I’m totally addicted to White Space.” — JLW