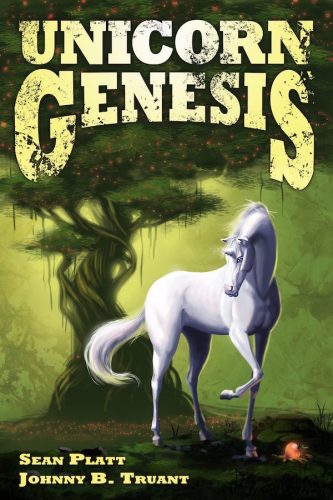 The Story Edward Doesn’t Want You to Read

Unicorn Genesis starts in the Farback, as Edward’s Grappies spin yarn of life as the first unicorns, Adam and Eve, of the time before the Great Flood that tore the worlds apart, before The Realm, before the Sands, and before Marshall Clint Gulliver.

Join Edward and Clint as the world’s favorite (and surliest) unicorn tells the gunslinger about his days as a unicorn colt, and how all life (in all worlds) began, as he comes of age in worlds both real and make-believe. Unicorn Genesis is another epic tale in the Unicorn Western series exploring oral tradition, the stories we love, and what we all believe to be true.

From the creators of Yesterday’s Gone (Platt) and Fat Vampire (Truant) comes this reinvention of both the western genre and unicorn lore. Written for children and teens — but complex and awesome enough for adult readers — Unicorn Western is “Harry Potter without wizards, with gunslingers, with talking unicorns and epic unicorn fights, and with more turkey pie.”