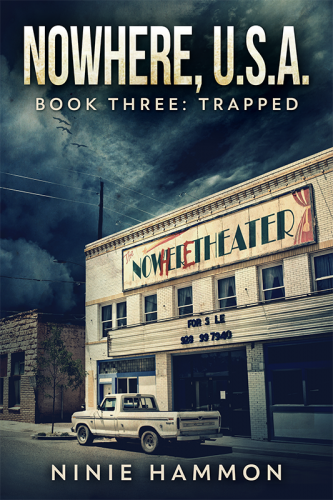 The sorceress of psychological suspense is back with the third book in her highly-anticipated new Nowhere, USA series. Ninie Hammon is at her career-best in Trapped — a story that will have you sleeping with the lights on.

Stuart McClintock comes to Nowhere County looking for his wife, Charlie, and their daughter, but when he gets to her mother’s house it’s is empty—no people or furniture only what’s on the walls. In frustration, Stuart writes on the blackboard on the wall in the kitchen: “Where Are You?”

Slowly, words scrawl back to him: “I’m trapped. It won’t let me go.”

Inside the Jabberwock, Charlie saw his words and responded, hoping he could see her words too. The next day, she writes “I want to go home!” on the blackboard. New letters immediately appear beneath hers, one at a time, all caps block letters, as though they were written by a child: “NO! STAY HERE AND PLAY WITH ME.”

Meanwhile, multiple murders make the trapped residents fear for their lives and long for a sense of law and order. Which is not at all what they get when Viola Tackett kills the country’s only law enforcement officer and takes over.

Trapped is the third book in Ninie Hammon’s new series, Nowhere, USA, a riveting psychological thriller about the residents of a forgotten county that inexplicably sinks through reality to find itself in the middle of Nowhere.