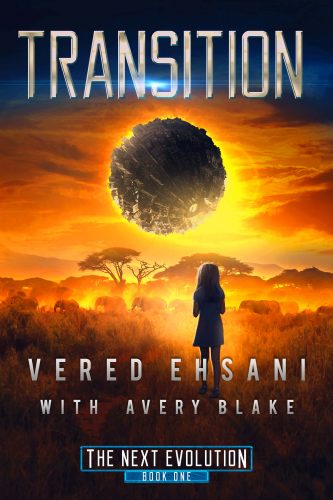 Trisha Walker thought the worst was behind her. Failed marriage. Her daughter’s health problems. The sudden move to Nairobi.

She thought wrong. Nothing can prepare her for the greatest transition yet: an alien invasion.

While the world crumbles under the fear of an approaching extraterrestrial armada, Trisha reluctantly plays host to a soldier, a thief, and an explosive secret. Things are getting dangerous, and that’s before the aliens land.

There’s one sliver of hope — a rumored safe place hidden atop a distant mountain. It’s a risky option, especially when a crime lord with a mysterious past comes searching for her stolen artifact of alien origin.

As wildlife, criminals, and aliens run rampant through Nairobi, Trisha is sure of only three things. Home isn’t safe. Peace is not an option. And she’ll do anything to protect her daughter.

But first, she’ll have to adjust to a world ruled by a new apex predator — humanity’s replacement.

Transition is the first book in the Avery Blake and Vered Ehsani series The Next Evolution. Discover your new favorite SciFi series today!