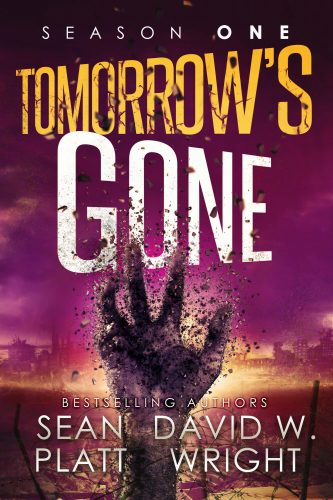 The highly-anticipated new series set in the post-apocalyptic wasteland first brought to life in best-seller Yesterday’s Gone … is here.

Fourteen years ago on a parallel Earth, a mysterious alien species turned most of the planet to uninhabitable Ruins where the rules of nature were drastically altered and caused almost everyone to disappear.

In the aftermath of The Event, two groups survived: one formed a new society in one of the few untouched areas, and the other hid underground, to wait for the world to recover.

But now those who hid have returned to the surface, seeking the girl who could be the world’s savior — or it’s destruction.

Tomorrow’s Gone Season One is the first book in Sean Platt and David W. Wright’s new tense post-apocalyptic serialized thriller that will leave you guessing to the end. Written in the world of their best-selling Yesterday’s Gone series, Platt and Wright deliver the goods like never before. If you like The Stand and LOST, you’ll love this series that combines tension, intrigue, and fear of the unknown.

WARNING: This is a post-apocalyptic horror story where bad people do evil things, and as such, this series features disturbing scenes and foul language. While it is all within the context of the story, some readers may find this content offensive.