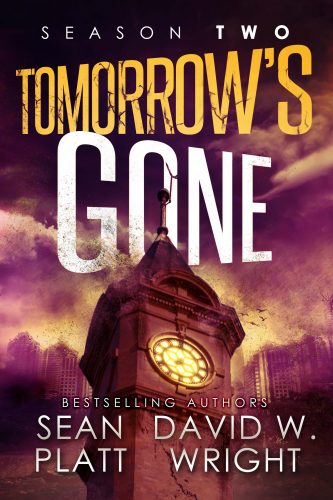 The highly-anticipated new series set in the post-apocalyptic wasteland first brought to life in best-seller Yesterday’s Gone … is here.

The Ruins are growing, threatening the Slums with total devastation — if Slum Lord can’t find a way to stop the alien magic, he won’t have to worry about the impending revolution because there will be no one alive to revolt.

While Slum Lord fights for the right to protect his city, Elijah Freeman is captured and thrown into General McTaggart’s mountain prison. Elijah must stop McTaggart from raising an Alt army … but how can he do it from this cell?

Luckily for both of them, Boricio continues to battle the Darkness inside him as he travels into the heart of enemy territory, seeking an artifact that could help them destroy the Ancients: the Seed.

Boricio finds more than he expected — but will it be enough to prevent a mass extinction?

Tomorrow’s Gone Season Two is the second book in Sean Platt and David W. Wright’s tense new post-apocalyptic serialized thriller that will leave you guessing to the end. If you like The Stand and LOST, you’ll love this series that combines tension, intrigue, and fear of the unknown.

WARNING: This is a post-apocalyptic horror story where bad people do evil things, and as such, this series features disturbing scenes and foul language. While it is all within the context of the story, some readers may find this content offensive.