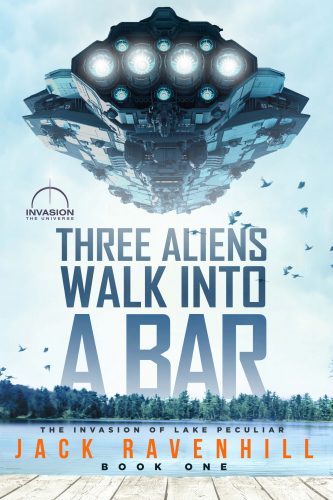 Aliens have invaded earth. In Lake Peculiar, that’s nothing to be rude about.

Nerdy 20-something Sam has lived his life desperate for the approval of his domineering best friend Gus, so when it’s announced that aliens are coming and Gus decides he wants to go to Canada to kiss his online girlfriend before the world ends, Sam allows himself to get pulled along. Again.

But Gus’s plans have a way of falling apart, and this one is no exception. They soon find themselves stranded in Lake Peculiar, Minnesota, a struggling small town that has weathered disasters before and is sure the alien invasion won’t mean anything to them … until three aliens arrive in the center of town.

Things are about to get much more complicated than anyone – especially wallflower Sam – is ready for.

Three Aliens Walk Into A Bar is the first book in Jack Ravenhill’s new series, a quirky take on the bestselling Invasion Universe. If you enjoy Garrison Keillor’s Tales from Lake Wobegon, you’ll love Lake Peculiar. Pick up your copy today!