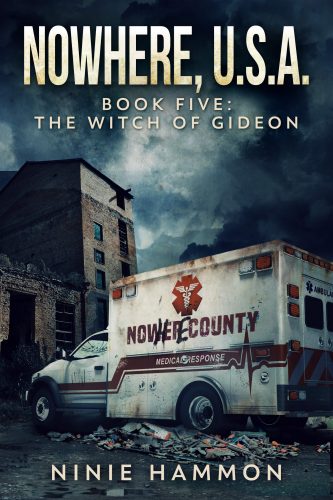 The sorceress of psychological suspense is back with the fifth book in her highly-anticipated new Nowhere USA series. Ninie Hammon is at her career-best in The Witch of Gideon — a story that will make you too afraid to go down the basement stairs at night.

10-year-old Lily Topple ran away from home in a little coal town called Gideon on one perfectly normal spring day in 1895 and got lost in the woods. When she found her way back the next morning, Gideon was a ghost town.

Everyone had vanished. The Jabberwock took them.

Lily stayed in the ghost town. Locals came to call her the Witch of Gideon. And when the Jabberwock returns a hundred years later and imprisons the whole of  Nowhere County, systematically making those people vanish, too, former history teacher and genealogist Thelma Jackson seeks out Lily Topple’s daughter, Rose. Now an old woman in a nursing home, Rose claims to know secrets her mother told her about the Jabberwock.

Will she reveal what she knows about the creature before it’s too late?

A clock is ticking, counting down the minutes the residents of Nowhere County have left to solve the mystery before the Jabberwock “absorbs” them all.

★★★★★ “If you like supernatural horror, told in the unique and distinctive Ninie’ voice of extremely talented stories’ teller, you will enjoy this series. I believe it is Ninie’s best book written in the recent years.” — Klapaucjusz

★★★★★ “This is the 5th in a 7-part series by Ninie Hammon, the most riveting author I’ve ever read. Unlike other series I’ve read, Ninie has a unique knack for introducing new characters with their own tensions into the larger developing (impossibly tense) story. I never feel like I’m re-hashing the old, but if you wanted to pick this one up as a stand-alone, you’d be HOOKED as well. How in the wide world is she going to resolve this storyline? What an intense ride this is!” — K. Koch

★★★★★ “In true Ninie Hammon fashion, The Witch of Gideon keeps the reader on the edge of their seat and not able to stop reading to see what might be coming up around the next corner. Definitely looking forward to the next book.” D. Straugh

★★★★★ “Absolutely BRILLIANT newest book in the Nowhere U.S.A. series! Book 5 in this series holds onto the reader’s attention from the first sentence and does not let go. Until the last sentence, when all I thought was, it can’t be over yet!” — SharonB

The Witch of Gideon is the fifth book in Ninie Hammon’s new series, Nowhere USA, a riveting psychological thriller about the residents of a forgotten county that inexplicably sinks through reality to find itself in the middle of Nowhere.

Fans of Justified, Under The Dome, and LOST will find themselves right at home in Nowhere USA.