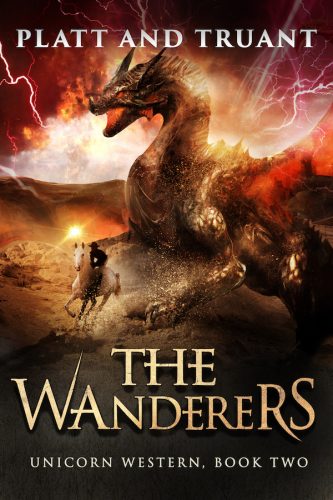 From the bestselling authors of Yesterday’s Gone, The Inevitable, Invasion, and Fat Vampire comes The Wanderers: Unicorn Western Book Two, a reinvention of both the western genre and unicorn lore.

Gunslinger Clint Gulliver has been pursuing the dark rider Dharma Kold for over two years, always following but never able to close the distance enough to rescue Mai — the woman that Kold stole from Clint as he left the town of Solace. But now, Clint’s hand is forced when his own unicorn companion, Edward, makes a disturbing discovery about the torture to which Clint’s almost-bride is being subjected by Kold’s unicorn of a different color.

Clint and Edward must overtake Kold and put an end to his blasphemy and his quest to reach The Realm before he reaches the Edge — a shifting, disintegrating zone of leaking magic and delirium at the very limit of the world. But before they can approach, they encounter a new, twisted foe that commands an unspeakable and ancient form of dark magic spewed from the world’s very core…

★★★★★ “Awesome continuation of the first story! Such a fun romp, kinda like a more light-hearted version of The Dark Tower. Can’t wait to read more!” — Spencer Borup

★★★★★ “I needed a fun, light read to destress, and this did the trick, as I knew it would. I love the writing and characters, and thought the subplot was done very well.” – Jennifer Sights

★★★★★ “Platt and Truant weave a breath-taking tapestry of wonder and despair, giving us closure but always raising the stakes. The two authors leave a trail of (turkey pie) crumbs for us to follow, and once you start on the journey you can’t wait to get to that next slice. I can’t wait to follow Edward and Clint on their next adventure. Keep em coming gentlemen.” — S.C. Beamish