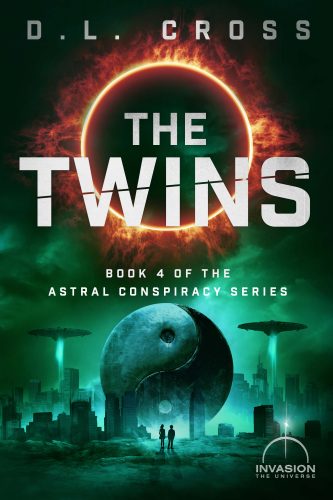 They took the world’s best hope. Took the father of her children. Now she’ll take revenge.

Landon Thorne was abducted by the Astrals. But Reverie Sterling doesn’t have time to dwell on his absence. She has twins to raise in a dystopian world.

She was trained to rise to any challenge, so that’s what she does. As one of the Resistance’s top fighters, she’s vowed revenge against the Astrals. To get it, she partners with an unlikely ally — the Nine, the mysterious organization that’s been thwarting the Resistance since Astral Day.

The tenuous alliance converges on Wright-Patterson Air Force Base, or what’s left of it. There they wage a war against local zealots and Astral warriors.

Reverie thinks she’s protecting her children. Too late, she realizes the twins have more power than anyone — and she’s the one who needs protecting.

The Twins is a taut, fast-paced Indiana Jones meets Falling Skies style thriller that spans the globe and digs deep into humanity’s past, unearthing mysterious artifacts and clues to aliens’ motives for invading our world. It is the fourth book in the Astral Conspiracy Series, set in the world of Platt and Truant’s groundbreaking Invasion Universe – the original series with over 1000 5-star reviews.