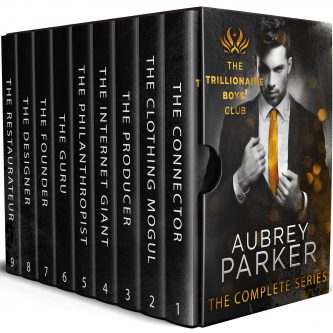 They say money can’t buy love. Fortunately, it can buy everything else.

If you like your boys rich, handsome, and very, very bad, this 9-book boxset is for you!

Meet the men of The Trillionaire Boys’ Club.

Each book tells the story of another of the club’s powerful members.

A week ago, I didn’t know who Nathan Turner was. That’s because he doesn’t own deals; he makes them instead. He’s the man behind the curtain — more powerful even than the man in front of it. He’s a multi-billion-dollar networker. A connector, in his own words.

My name is Ashton Moran, and I’m CEO of the $2.2 billion Hurricane Apparel company. You’d think that’d be enough, but it’s not. Not for Alyssa. She says my public image sucks. She says my being a womanizer is hurting Hurricane’s brand.

I’m not new to this secret club of billionaires. I know all about their Syndicate … and even some of their plans to control the world. I’m Alyssa Friggin’ Galloway, publicity genius, and I’ve dealt with all of them: Nathan Turner, who built the Boys’ Club, and even the insufferable Ashton Moran.

The Syndicate controls the world, and we control the Syndicate. That’s the way this “Trillionaire Boys’ Club” thing was supposed to work — and as the man behind the massive Forage search engine, I have my part to play.

Anthony Ross is larger than life: tall and handsome, strong in body, mind, and vision. I’ve always believed what my friend Jamie says: what Anthony does onstage isn’t an act. One day, he’ll change the world.

My name is Evan Cohen. I’m the founder of LiveLyfe, the largest social network on the planet. Now I’m looking for something new to challenge me, another way to change the world all over again.

I’m a small-town girl with simple needs. I like sewing custom clothes and running my family’s tailor shop. It’s not work. It’s a labor of love: making beautiful things that last.

My name is Mateo Saint, founder of PEZA. Running my restaurant chain has lost its thrill, so I’m looking for a new adventure — something that tests my limits. I want to create a physical challenge like the world has never seen. All I need to do it is a mountain.