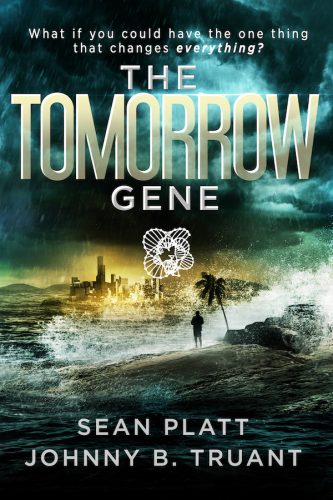 From the bestselling authors of the Invasion and Yesterday’s Gone series comes The Tomorrow Gene, a disturbing philosophical exploration of the future of genetic engineering and what happens when scientific advancement outpaces our ethics.

What if you could have the one thing that changes everything?

Ephraim Todd has landed in paradise: Eden, the largest artificial archipelago in the world. Eden is home to The Evermore Corporation — a company rumored to have created the Fountain of Youth and offers the ridiculously rich genetic enhancements and modifications the rest of the world can only dream about.

But that’s not why Ephraim is on Eden. He’s obsessed with finding his brother, who disappeared more than a decade ago. He’s sure his brother is on this island.

But Eden doesn’t surrender its secrets easily. When Ephraim stumbles upon a disturbing truth, all his evidence mysteriously disappears. He knows they’re on to him, but is suddenly unable to trust his own mind. Is the world around him falling apart, or is it just him?

Ephraim believes that he’s on a quest to find his brother … but he’s really on a journey to discover himself. And what he finds will turn his entire life into a lie.

★★★★★ “I don’t think I have ever read a book that captured me like this one. It grabbed me and…. honestly I don’t think it has let go yet. There are more twists and turns and truths that were not. I’m still sort of lost but I don’t mind. Never have I read a book with palpable tension! I thought I was going to need an Ativan! This was an amazing read, loved every bit of it!” — Vmac

★★★★★ “Once again the dynamic writing duo produce a page spinning book that forced me to tear through the pages to see what exactly was going on and who is who and what and when and why!” — SueSue

★★★★★ “Wow… I couldn’t put it down at times when I needed to. It was fast paced and thrilling throughout the book. It never slowed enough to bog down at all.” — gl2060

★★★★★ “This one is definitely one of the best Platt/Truant stories I’ve read in a while. Finished this one and already got the other two sequels. Can’t wait to see where the story goes.” — Erich Neubert

★★★★★ “I love Platt & Truant, and also Platt & Wright Stories. I am already on the 2nd book & I am looking forward to the final 3rd. I love the twists & turns and just the whole concept. The tomorrow of the future.” — Lynda Nelson