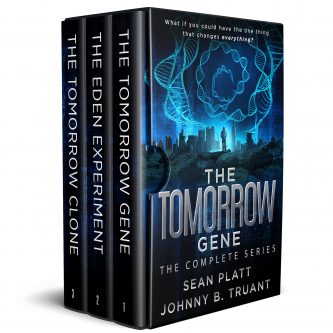 From the bestselling authors of the Alien Invasion and Yesterday’s Gone series comes The Tomorrow Gene, a disturbing philosophical exploration of the future of genetic engineering and what happens when scientific advancement outpaces our ethics.

What if you could have the one thing that changes everything?

Ephraim Todd has landed in paradise: Eden, the largest artificial archipelago in the world. Eden is home to The Evermore Corporation—rumored to have created the Fountain of Youth—who offers the ridiculously rich genetic enhancements and modifications that the rest of the world can only dream about.

But that’s not why Ephraim is on Eden. He’s obsessed with finding his brother, who disappeared more than a decade ago. He’s sure his brother is on this island.

But Eden doesn’t surrender its secrets easily. When Ephraim stumbles upon a disturbing truth, all his evidence mysteriously disappears. He knows they’re on to him, but is suddenly unable to trust his own mind. Is the world around him falling apart, or is it just him?

Ephraim believes that he’s on a quest to find his brother … but he’s really on a journey to discover himself. And what he finds will turn his entire life into a lie.

Every island in the archipelago has gone up in flames, and thousands are dead.

Also dead? The dreams of eternal life for hopefuls around the globe.

And one man is the target of their ire.

After finding his brother, Ephraim Todd got more than he bargained for. Now he’s fighting for his freedom, along with his sanity—desperate to prove his innocence and show everyone he isn’t crazy.

But after the evidence that would prove his innocence disappears, no one will back up hist story. Ephraim is forced to take matters into his own hands and face the insurmountable odds to find the one thing that can clear his name.

Can he find the answers before his mind finally cracks and crumbles to nothing?

The world is up in arms after a brutal murder is captured on video and broadcast around the globe.

The man responsible, Ephraim Todd — who previously burned the island of Eden to ashes — incarcerated. Yes, he killed Neven Connolly, but nobody believes his claim that he was defending himself.

Unknown to Ephraim, Neven is alive and well. His death was all part of the plan, and Ephraim played his part perfectly.

Then Ephraim escapes with the help of one of the world’s most powerful and beloved people—a man who may be to blame for the end of the world as we know it.

Will Ephraim stop Neven before it’s too late, or is the end of humanity one Tomorrow Clone away?

This series is completed. Read the whole trilogy today!