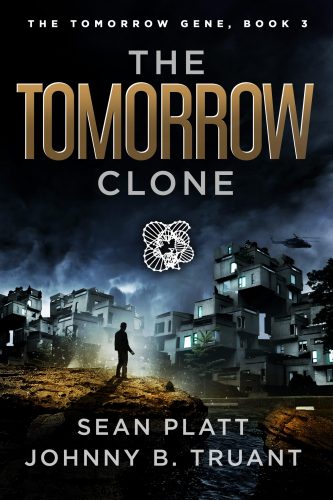 From the bestselling authors of the Alien Invasion and Yesterday’s Gone series comes The Tomorrow Gene, a disturbing philosophical exploration of the future of genetic engineering and what happens when scientific advancement outpaces our ethics.

The world is up in arms after a brutal murder is captured on video and broadcast around the globe.

The man responsible, Ephraim Todd — who previously burned the island of Eden to ashes — incarcerated. Yes, he killed Neven Connolly, but nobody believes his claim that he was defending himself.

Unknown to Ephraim, Neven is alive and well. His death was all part of the plan, and Ephraim played his part perfectly.

Then Ephraim escapes with the help of one of the world’s most powerful and beloved people—a man who may be to blame for the end of the world as we know it.

Will Ephraim stop Neven before it’s too late, or is the end of humanity one Tomorrow Clone away?

★★★★★ “This entire series had so many unexpected twist and turns, I just could put it down. I read all three books in a coupe of weeks. The subject line intrigued me and scared the hell out of me.” — Nancy Kennard

★★★★★ “Thoroughly enjoyed these books. Great way to finish the stories. Kept me hooked until the last page. Left me contemplating about what comes next.” — shansher

★★★★★ “Ephraim Todd is back in the concluding book to the Tomorrow Gene trilogy. Once again, Sean and Johnny hit one out of the park.” — Spence M

★★★★★ “Wow just loved book 3 this series is one of my favorite. So many levels this book really makes you think. More than just great sci-fi but a book that hit me with so many emotions. Loved every second of this adventure !!” — Grant P Richardson Jr

★★★★★ “Darn. I didn’t want to like this one that much. The second one ended kind of strange for me, but I had to find out how the story ended. In fact, the ebbing wasn’t even what I wanted it to be. But what do I know. It was a much better ending than I thought it would be. So there. Great trilogy, great read, a page-turner. A book even a clone could love.” — Ropebender

The Tomorrow Clone is Book Three of The Tomorrow Gene trilogy from authors Sean Platt and Johnny B. Truant. This series is completed. Read the whole trilogy today!