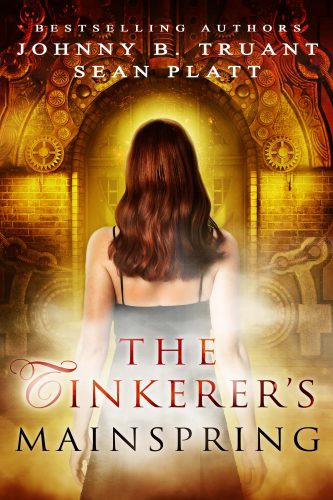 From the bestselling authors of Invasion, Unicorn Western, and Fat Vampire comes The Tinkerer’s Mainspring.

Abitha Scarborough is a psychological specialist and a junior curator in the Ministry of Decorum, the wing of the Alterian Government that deals with manners, etiquette, decorum, espionage, misinformation, and propaganda. She and her family felt secure in their position in life, until they got the news that Abitha was being transferred to Joffrey Collins, the asylum for dissenters and criminally insane.

This is not a good thing for the family.

In a desperate attempt to stop the ruin of their family and the loss of everything they love, Abitha’s daughters, Portia and Ursula, along with their closest friends in the informal gang they call The Renaissance Boys, decide to embark on a quest for the Tinkerer’s Mainspring.

Thought to be a myth, the Tinkerer’s Mainspring is an ancient artifact, handcrafted by the rebels of old. If they can find the Mainspring, they can change everything. But they aren’t the only ones looking for it — Lazarus Glass is close behind.

Can The Renaissance Boys find the Mainspring and save the family before Lazarus can seize it?

The Tinkerer’s Mainspring is a new stand-alone novel written in the world of The Dream Engine, a thrilling young adult dystopian adventure set in a dark fantasy dream world with a touch of steampunk. Get your copy today!