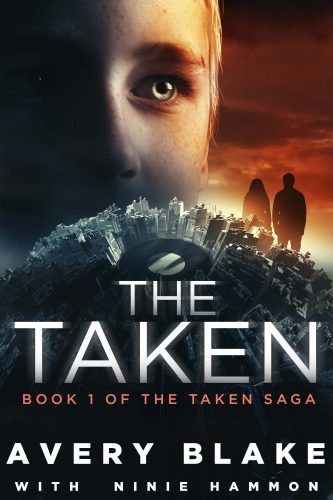 SciFi aficionado, Avery Blake, and sorceress of suspense, Ninie Hammon, team up to bring you the first book in The Taken Saga, a terrifying tale of alien invasion told from the perspective of three very special young people.

Although they’ve never met, Star, Noah, and Paco have been dreaming about each other for years, each never sure that the others exist — until all three children start sharing dreams of invading aliens.

When the alien ships are spotted, six days from Earth, society quickly descends into brutal chaos.

Star, in New Mexico, is blamed for summoning the aliens to exact revenge for the Roswell crash.

Noah, in Kentucky, discovers that a terror-stricken scientist intends to kill Noah and his classmates, to save them from the atrocities of a war with the aliens.

And Paco, in California, is forced to play a deadly game of hide-and-seek in a maximum-security prison when the alien invasion interrupts Scared Straight Day.

When these three children are taken, will their strange psychic bond help them survive what happens next?

The Taken is the first book in the new alien invasion series, The Taken Saga, by Avery Blake and Ninie Hammon. Get The Taken and discover your new favorite science fiction series today!