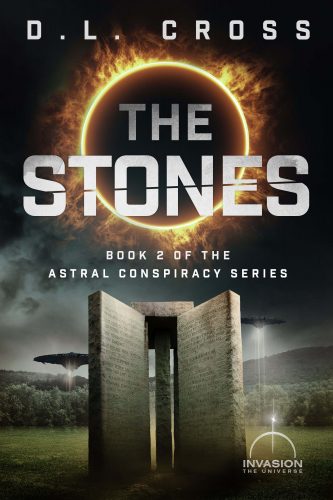 He’s running from Astrals. Running with Black Ops. And running toward the end of the world.

Landon Thorne belongs to an elite group: he’s one of the few people who have ever accessed the Akashic Record. He discovers a weapon that could defend the Earth.

The Astrals want to stop him. The government wants to control him. Even his allies are hiding something.

Through it all, he has one purpose. One compulsion. He’s drawn to the Georgia Guidestones.

His journey is fraught with danger – bandits, cannibals, and ancient booby traps — but when Landon finally reaches the Stones, even he is surprised by what he finds. If he can decipher the code, he can save the world.

If he can’t? His discovery may destroy him – along with the rest of the human race.

The Stones is a taut, fast-paced Indiana Jones meets Falling Skies style thriller that spans the globe and digs deep into humanity’s past, unearthing mysterious artifacts and clues to aliens’ motives for invading our world. It is the second book in the Astral Conspiracy Series, set in the world of Platt and Truant’s groundbreaking Invasion Universe – the original series with over 1000 5-star reviews.