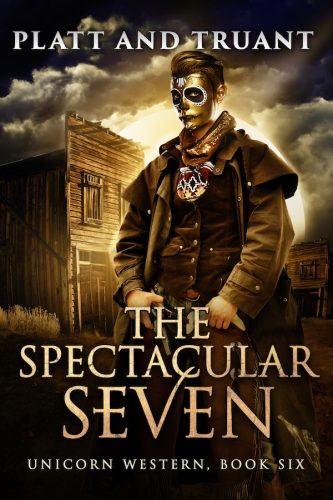 From the bestselling authors of Yesterday’s Gone, The Inevitable, Invasion, and Fat Vampire comes The Spectacular Seven: Unicorn Western Book Six, a reinvention of both the western genre and unicorn lore.

In their quest to bring the renegade Marshal Dharma Kold to justice, Clint and Edward have sacrificed much. But now, with Mai seemingly on the brink of recovery, they must decide whether to continue their fatal pursuit, or allow the magic of the town of Baracho Gulch to heal her.

With the help of an unlikely gang of allies, Clint and Edward will make their stand against the forces that threaten to tear apart Realm and Sands.

★★★★★ “The Realm’s magic starts to become a lot more obvious as they draw closer, but who is going to have better control over it? The gunslinger and the villagers…or some old friends come back to haunt them?” — Erin M.

★★★★★ “The epic battles just get bigger and better…and I did get some Matrix flashbacks reading this one.” — Demelza Carlton