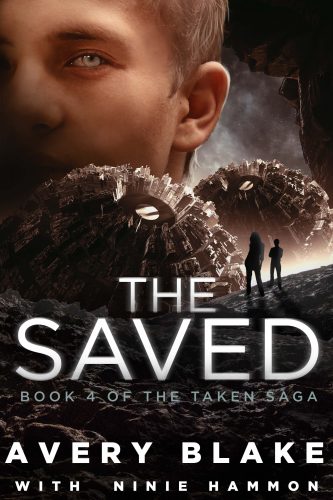 SciFi aficionado, Avery Blake, and sorceress of suspense, Ninie Hammon, team up to bring you The Saved. This is the fourth book in The Taken Saga, a terrifying tale of alien invasion told from the perspective of three very special young people.

After the blind Apache girl, Star, predicts the aliens will wipe out humanity by flooding the earth, the inhabitants of Zion Village seal themselves in the Matheson Caverns — fighting their way through an army led by Paco, who tries to steal their hiding place. Even though food stores are low, once Paco is defeated and left for dead, they start to hope they will survive …  but their real battle for survival has only begun.

When people start disappearing, the survivors realize that other creatures have sought refuge in the caverns too – cougars and wolves stalk stragglers from the group.

Worse, they don’t know that Paco is still alive, using his gift of mind control to turn the villagers against each other so he can seize control. When Paco’s mind breaks down, the people he controls become mindless killing machines.

Then there is the worst danger of all: four aliens have been sealed inside the caves too.

While the villagers hunt wild animals and defend themselves from Paco’s berserkers, Star and Noah must lead a daring suicide mission to lure the aliens into the old mine and blow it up. Can these young heroes save the last remnants of humanity without burying everyone alive … or drowning them by allowing the waters above to fill the caverns?

In a blockbuster conclusion to the four-book series, this small remnant of humanity makes its final stand. If they don’t survive, the aliens win and the human race becomes extinct.

The Saved is the fourth and final book in the new alien invasion series, The Taken Saga, by Avery Blake and Ninie Hammon. Get The Saved and finish your new favorite science fiction series today!