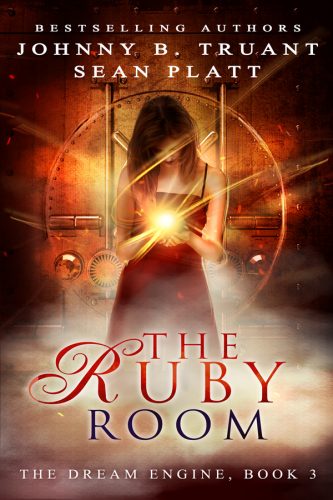 With both Fleet and Flock in turmoil and conditions at the Ministry of Manifestation coming undone, Eila, Cora, and their small band of allies find themselves on the run, seeking a mysterious object that has the power to unravel all of Alterra. Cracks in Parliament’s carefully constructed lie are beginning to show at the seams, meanwhile, as Decorum attempts to fight the slow bleed of chaos: citizens losing their minds as Crumble’s pacification fails, doorways opening to other worlds, leagues of spies trying to hide the truth.

After failing to recover Eve’s prize at the Convenience and finding Pavilion all but inaccessible, the troupe’s options become limited. Bigger players have entered the game, and even those who knew Alterra’s true path have found themselves empty-handed — tricked by higher powers.

Eila’s only hope is to regain control of the missing engine core, but she must use another talisman to find it. And as Eila soon finds, there are plans within plans, and only one set of hands (hands closer to Eila than she’s ever realized) is able to pull all of the levers.

★★★★★ “MORE…WE WANT MORE!!! This should be another of your ongoing series! This whole series proves just how diversified the authors are and how they can not just write but create anything!” — Greg Lambert

★★★★★ “I love the Dream Engine Books. The 3rd book in the series so far, it’s fast-paced, surprising and exciting, and we learn more about not just Alterra, but other places in Terra and their Engines. It’s one of my favorite YA novels, and one of my favorite fantasy/steampunk universes.” — JeanDiFalco

★★★★★ “The boys did a great job reconnecting us to Alterra and all of its characters, then they turned their world completely upside down. We’re immediately thrown into the deep end of the story as the pace quickly ramps up to frantic and unstoppable with too many twists and turns to count. I love how some of the characters have matured; Juliette is a complete badass! OMG!!!” — Adam Bailey

The Ruby Room, book three in The Dream Engine Series, ratchets the tension up to eleven, turning the careful world of Alterra and its foes beyond inside out. Get all three books in this completed series today.