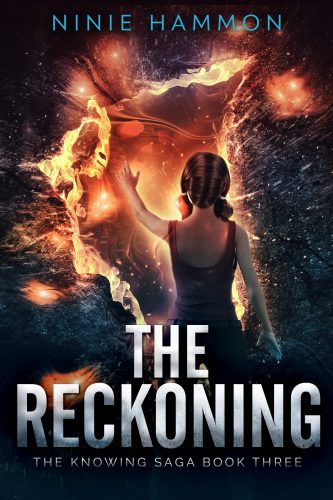 Sorceress of psychological suspense, Ninie Hammon, brings you the third book in The Knowing Saga, a sprawling tale of spiritual warfare that spans a quarter of a century. If you crave sleep-with-the-lights-on suspense coupled with characters so true they’ll feel like family then, The Reckoning is right up your alley.

Ordinary people. A demon from hell. The final showdown…

In the summer of 1985, Daniel Burke, Becca Hawkins, and Jack Carpenter confronted a demon prince, an efreet, and somehow drove it back to hell. They were twelve years old. Twenty-six years later, the efreet returns and sends superhuman assassins to kill the now-adult “Three Muskateers” before they can challenge him again. Reconnecting for the first time in a quarter of a century, the childhood friends piece together fragmentary memories of that long-ago summer as they fight desperately to stay alive—and to stop the voracious quest for power of the man possessed by the efreet, Chapman Whitworth.

Now comes the final confrontation. The only thing that stands between Whitworth and the presidency of the United States is a rag-tag group of ordinary people–Daniel, Becca, Jack, and their friends. This time, they have to go after the demon, not the man—and it doesn’t matter that none of them remembers how they defeated it the first time. They have to find the monster–hidden in a labyrinth of dark caves protected by legions of poisonous spiders and snakes. And they have to stand together against it. If any one of them breaks, they all will die. It has come down to this—one last chance. It’s time for the reckoning.

The Knowing began the tale. The Deceiving expanded it. Now, The Reckoning delivers a heart-pounding continuation with a riveting account of the battle against an evil as old as the skeleton of the universe.

★★★★★ “Simply phenomenal. It’s hard to nail the conclusion to a trilogy in a satisfying manner, but Ninie really knocked it out of the park.” — Steve Bochte

★★★★★ “What a ripping finale to the trilogy!! The author’s wild imagination, coupled with brilliant word skills and dazzling descriptive abilities, present this work as a reading experience – not just a book. Suspense, action, horror, intrigue – it’s all there, along with beautifully balanced and subtle humour when the occasion calls for it.” — M. Dusrston

★★★★★ “There are times during the reading of the book that I was so caught up in the story that I reacted physically with racing heart and sweating palms. At other times I consciously breathed a sigh of relief and appreciated the calm. It’s possible to read any of the three books in this set alone and follow the story line. But don’t cheat yourself, read The Knowing and The Deceiving before you jump off into The Reckoning. You won’t regret it!” — Phyllis W.

★★★★★ “LOVED IT….Again Ninie has not let me down. Before I read book 3 I re-read the first two again. I was expecting to rush thru those because of knowing what happened, NOT. I enjoyed reading them again and picked up some points I didn’t see the first time. If you have not tried this author, you really must. Most of her books I would give 10 stars if I could. You rock Ninie!!!” — D. Price

★★★★★ “This book is fairly fast paced which makes it hard to put down. The fact that the action keeps you turning pages, sometimes does cause me to get less sleep. Then when I finally read the last page, I am sorry that I read so quickly and that it is already over.” — Kaye

If you like fast-paced action, gut-tying thrills, and themes that will challenge everything you believe about yourself, life and reality, about good and evil, and the whole nature of the universe—The Reckoning is the book for you.