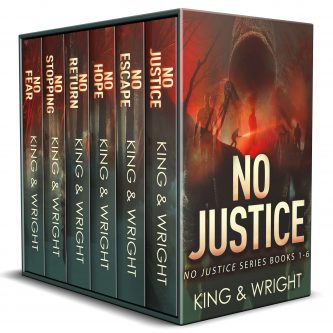 From the bestselling authors of Yesterday’s Gone and Pretty Killer comes the unforgettable thriller series that blends mystery and suspense into pulse-pounding revenge-seeking, serial-killing action.

Where her law ends, his justice is only beginning …

Detective Mallory Black’s world was shredded when her daughter, Ashley, was murdered by a serial killer with an unspeakable fetish and the truly twisted desire to carry it out.

Jasper Parish is a vigilante who punishes killers that have escaped traditional justice. Relying on the psychic visions of his daughter, he wages war from the shadows, doing what the police can’t — or won’t — do.

Hero, killer, and vigilante are on a collision course in a world where there is no justice … unless you’re willing to risk everything in the pursuit of your own.

This collection pulls together all 6 books of the completed No Justice series, a pulse-pounding new series for fans of Dexter, Silence of the Lambs, and Seven.