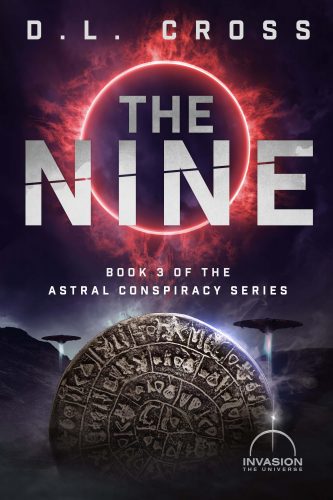 Landon Thorne is convinced the key to defeating the Astrals is in the vault — a repository of ancient artifacts, origins unknown, covered with undeciphered glyphs. He’s also convinced he’s the one person on the planet who can translate the markings.

But strange, frightening things happen every time he gets close to the relics.

His allies decide it’s not safe to let him near the vault, so they force him to take a new mission. But before he can complete it, he’s captured by the Nine — the nefarious organization he’s been running from.

Their leader makes him an offer he can’t refuse — study the Dropa Stones for the answers they seek. Or else. To do that, he needs a cipher. And there’s only one place he can get it.

Getting in will be difficult. Getting out may prove impossible.

The Nine is a taut, fast-paced Indiana Jones meets Falling Skies style thriller that spans the globe and digs deep into humanity’s past, unearthing mysterious artifacts and clues to aliens’ motives for invading our world. It is the third book in the Astral Conspiracy Series, set in the world of Platt and Truant’s groundbreaking Invasion Universe – the original series with over 1000 5-star reviews.