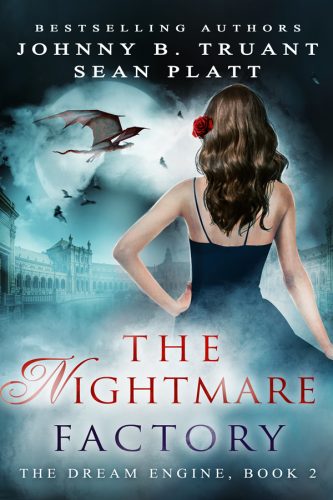 After breaching the Fog and finding the ship beyond, Eila Doyle finds herself confronting a truth: her land of Alterra, contrary to what she’s been taught, isn’t alone — and Parliament, it seems, has been keeping yet another horrible secret.

The band of rebels at Alterra’s borders is presided over by Admiral Wellington: a man who needs Eila’s reality-bending talents … but requires that she turn traitor in order to provide them. Wellington’s arguments are convincing, pointing to atrocities Alterra has committed and the army of dragons and demons being built by the all-too-real Dark King … but is Wellington all he seems, or does he have other motives?

As her old friend suffers, Eila makes friends among the warriors of the Flock: the massive Obsidian, who wields a club. Lithe Abbie, with a score to settle. And quiet Eve, who has her own agenda. But as the big change nears, Eila and Cora both face a dilemma: are the newcomers here to liberate Alterra … or to destroy it?

★★★★★ “The Nightmare Factory is not only a solid followup to The Dream Engine, but it actually improves upon it.” — Erin M.

★★★★★ “The Nightmare Factory picks up right where The Dream Engine — one of my favorite books of 2014 — leaves off, and delivers on too many levels to count. I was drawn in and taken for a fast and furious ride from the start.” — Adam Bailey

★★★★★ “Fantastic follow-up to The Dream Engine. Loved the first one, the second does not disappoint. Explains more about the story-line and characters, with some surprises!” — jkaustin02

★★★★★ “I loved that the world was more developed in The Nightmare Factory. Normally books have a ‘sophmore slump’ where the second book where the second doesn’t live up to the expectations of the first. This was exactly the opposite.” — Dan & Stacey

★★★★★ “The Nightmare Factory is a perfect mix of action, mystery, and human drama that shows why reading and books still have a rightful place in a world dominated by TV, movies and video games.” — Jarkko Laine

The Nightmare Factory, book two in The Dream Engine Series, cracks Alterra’s closed box open, spilling a whole new world of monsters and angels, spies and turncoats. It will leave you breathless, doubting reality all over again. Get all three books in this completed series today.