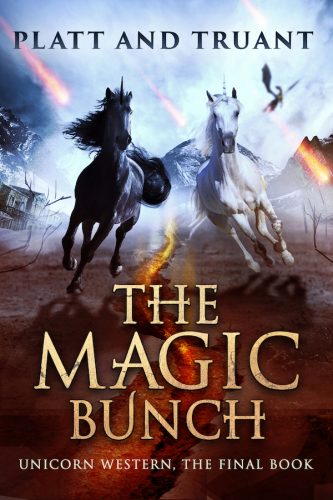 From the bestselling authors of Yesterday’s Gone, The Inevitable, Invasion, and Fat Vampire comes The Magic Bunch: Unicorn Western Book Nine, a reinvention of both the western genre and unicorn lore.

The pursuit of the dark rider intensifies.

When both the fracturing worlds and Clint’s bride-to-be are thrust into peril by an old foe, the gunslinger must come out of retirement and aim his seven-shooters at the dark magic and those who bring it.

An epic quest hurls marshal and unicorn across the endless desert in pursuit of the dark rider Dharma Kold and his unicorn of a different color, where they must battle their way back toward The Realm to uncover the truth…and mayhap save the worlds that hang in the balance.