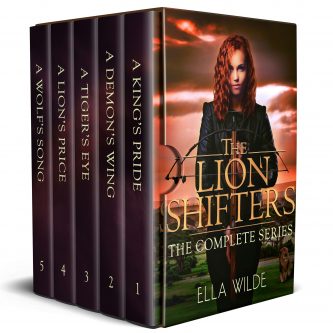 Shifts happen. Hearts change. Africa awaits. Escape to a land where everything is possible.

This collection contains ALL FIVE BOOKS in “The Lion Shifters” series:

A King’s Pride: When Emma rescues a lion Shifter from a trap, she’s flung into danger and a dilemma: move on, or risk her secrets and her heart to save the lion’s Pride.

A Demon’s Wing: When a family tragedy and a king’s command force lion shifter Jed Kiprop and demon Grace Elkhart to work together, sparks fly despite their mutual distrust.

A Tiger’s Eye: Fun-loving Tana “Tiger” Shah is about to lose everything, including her freedom. Lion Shifter Ezekiel Kiprop isn’t one to play games, especially if the safety of his Pride is at risk. Can their love survive the truth Tiger has been hiding?

A Lion’s Price: Rebecca Keitany’s future is looking bright. The last thing she needs is to be saddled with Lion Shifter Daniel Kiprop. Can he convince her he’s a changed lion before she takes the offer of the Lightning Bird and disappears forever?

A Wolf’s Song: Isaac Kiprop is determined this will be his last burglary job for the hyena queen. He’s sure he can get away with it, until a know-it-all wolf Shifter crashes his party and his heart.

Join the Kiprop Pride and start your adventure today!