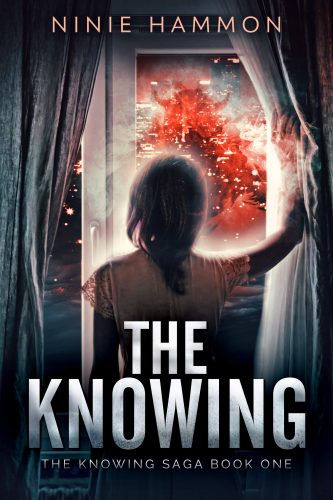 Sorceress of psychological suspense, Ninie Hammon, brings you the first book in The Knowing Saga, a sprawling tale of spiritual warfare that spans a quarter of a century. If you crave sleep-with-the-lights-on suspense coupled with characters so true they’ll feel like family, The Knowing will open a world you won’t want to believe is real. But it is.

It starts with a school shooting…

It ends with the return of an evil as ancient as the bones of the universe.

When the hot call comes over the radio: “Code Red! Active shooter at Carlisle Elementary School,” Police Sergeant Jack Carpenter has only one job: find the gunman; take him out. Carpenter rushes into the school, fully armed and focused on cold, hard reality. But what happens to him there shatters the world as he knew it. And in the next three days, everything Jack Carpenter believes about himself, about reality, about good and evil and the whole nature of the universe will be challenged.

Can it possibly be true—seriously?—that invisible demons prowl among us?

That a winged creature more horrifying than any Hollywood-animated, computer-generated, mechanical unreality, exist?

And that the single-minded mission of the beast—a creation of absolute, soul-less evil—is to kill Jack Carpenter?

Award-winning journalist and suspense author Ninie Hammon has created a terrifyingly real world where the people fighting to defeat invisible monsters from the bowels of hell are folks you might bump carts with in the grocery store.

People so ordinary, in fact, that when the unexplainable rips apart their lives, when demons destroy their reputations and attack their children, you begin to wonder if the same thing could happen to you, too.

★★★★★ “The story arc grabbed a hold of me and did not let go till the end. Well, actually, it has not let go ’cause I am ready to pick up the next book and pick up where this one left off.” — Leah SP

★★★★★ “It’s good vs. evil in the vein of Stephen King’s The Stand. People are doing their normal thing – good, bad or indifferent – and all of a sudden it goes sideways. There were characters I cheered for, cried for, held my breath for – and some I was trying to think up ways to help get rid of.” — Renee Alice

★★★★★ “The book itself is kind of a cross between King’s “It” and his “The Stand” but with Ninie’s special touch. She has a way of drawing the reader into her world, making them a part of the story. She makes you feel as though you really know the people she creates. They come alive on the page for me with a reality that few authors can match…and yes, I’m including the “Main-Stream/New York Times Best Seller Author List”!” — The Old Guy

★★★★★ “This book is as good or better than many of Stephen King’s books. Ms Hammon has excelled with a dark supernatural story, that grows in intensity from the first page and is wrapped up by the last page. ” — Kotuku

★★★★★ “The Knowing” currently resides in the Top Ten in the last ten years I have read right alongside such books as “Unbroken” and “The Jakarta Pandemic”. This book is one I have already strongly suggested my closest friends queue for their next read or… stop the boring book they are currently reading and replace it immediately with “The Knowing”! — Dr. Thomas C. Mohler

If you enjoy a fast-paced, suspense-filled story so gripping you’ll decide the dirty dishes aren’t going anywhere and the car will survive one more day without an oil change, The Knowing is the book for you.