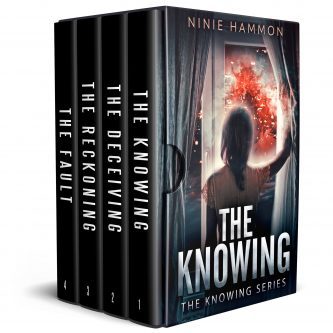 Sorceress of psychological suspense, Ninie Hammon, brings you The Knowing Series, a sprawling tale of spiritual warfare that spans a quarter of a century. If you crave sleep-with-the-lights-on suspense coupled with characters so true they’ll feel like family, The Knowing will open a world you won’t want to believe is real. But it is.

Here, for the first time, the four books in The Knowing Series have been collected into one convenient box set so you can read straight through to the very end without stopping!

The Knowing: It starts with a school shooting… It ends with the return of an evil as ancient as the bones of the universe.

The Deceiving: The monster demon is BACK! …and he’s had twenty-six years to plot his revenge.

The Reckoning: Ordinary people. A demon from hell. The final showdown…

The Fault: The happiest day of their lives turns into their worst nightmare…

If you enjoy a fast-paced, chills-filled story so gripping you’ll decide the dirty dishes aren’t going anywhere and the car will survive one more day without an oil change, The Knowing Series was written for you! Read the whole series today!