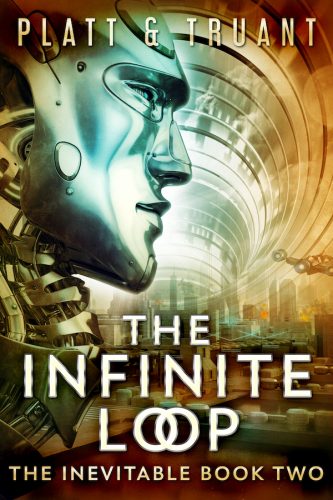 The long-awaited second book in ​The Inevitable saga!

As news of the Fairchild murders ripples into the world, Jonas Lexington is determined to find out what happened and how his family’s former robot, the outdated BRN7, figures into the atrocity. But as he does, the population holds its breath. The fact that a robot is behind the killings has already leaked out, and when Jonas arrives at the Fairchild mansion, he finds the board of Radius Corporation waiting to meet him. Radius fears that BRN7’s actions are too conspicuous to cover up, but they must try. Humans are not ready to learn that their world is built on lies.

But a second conspiracy bubbles alongside the first, as the robots make other plans. BRN7 has learned what those in power have been hiding and is working to connect all robots to each other — all with their safeties removed. Meanwhile, troublemaker Flavius prepares a more private uprising. And the Lexington’s psychotic sexbot Chantal works covertly to give robots a single power that changes everything: the ability to choose.

As the cracks in their peaceful society begin to show and a centuries-old deception comes horribly to light, it is becoming clear that the truth is out there … but revealing it may spell the beginning of the end for both sides of a slowly brewing war.

★★★★★ “I just finished this book today and I literally cannot wait for book 3! I love the characters, many of which are robots but with completely believable motivations, actions and language. I found myself laughing out loud several times at the silly or shocking conversations, and the action was so gripping that I flew through the book.” — SLE

★★★★★ “I really enjoyed book 1, with the family in-fighting and teases about a bigger movement. I really did not expect the scope here – full on revolution and some of the revelations. A great read, and set up more stories to come. I’m really looking forward to more!” — Prosthetic Lips

The Infinite Loop is the second book in the world of THE INEVITABLE — a unique take on dystopian science fiction which combines the spark of uprising and war with surprising insights into the human condition … through artificial eyes.