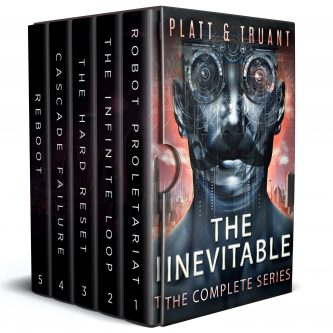 This collection brings together all 5 books in the world of THE INEVITABLE — a unique take on dystopian science fiction which combines the spark of uprising and war with surprising insights into the human condition … through artificial eyes.

Robots were made to serve us. But now they have other plans …

In book 1, Robot Proletariat, robots learned to resist, to disobey, and even to break the unbreakable law: A robot may not harm a human being, or by omission of action allow one to be harmed. (Book 1 is not in this collection.)

In book 2, The Infinite Loop, news of the Fairchild murders ripples out through the world. Radius Corporation tries to cover it up, humans aren’t ready to learn their world is built upon lies. Meanwhile, the robots start coming together to form a plan.

In book 3, The Hard Reset, robots everywhere start to organize, growing into armies, and posing a legitimate threat to infrastructure and human life. Radius Corporation wants to initiate a hard reset to put life back on its previous course, but there are many obstacles in the way. As lines are drawn and an all-out war looks increasingly inevitable, it’s time for everyone to decide which side they are really on.

Book 4, Cascade Failure, chronicles a critical point in the war between Man and Machine. The Hard Reset was first botched, then blocked by a brutal murder. When smugglers bring a world-destroying device from Oceana to United, it might be the moment when robots end all human life, so the robots can inherit the planet. Man and Machine are now in a final battle of wills, and only one will survive.

Book 5, Reboot, starts 400 years after the Hard Reset when Profusion awakens to sentience. It is a force, unlike anything the world has ever seen, able to strip entire cities of all signs of human and robotic life, leaving only bones and silica in its wake. Ancient robots and war heroes, Mars, Cromwell, and Barney must take a journey to meet an old friend, while a representative of Oceanic law enforcement joins forces with an old friend in a new body to help save the world. Can they unlock the mystery of metakind in time to stop the destruction?

Now you can read all 5 books by best-selling authors Sean Platt and Johnny B Truant (Invasion, The Beam, Fat Vampire, Yesterday’s Gone, and more) collected into this box set for the first time. Read The Inevitable series today!