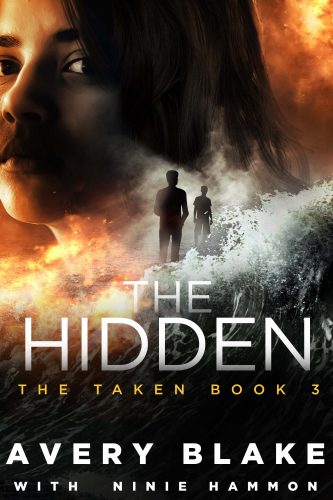 SciFi aficionado Avery Blake and sorceress of suspense Ninie Hammon team up to bring you The Hidden. This is the third book in The Taken Saga, a terrifying tale of alien invasion told from the perspective of three very special young people.

The Flood is coming.

Star has a vision that she paints on the gymnasium floor of the Zion Village: a black starship shooting a beam of light at the polar ice caps, melting them and flooding the world. Papa Eagle Feather claims that Star’s vision is the fulfillment of a prophecy about a child from the stars who will save her people. With her warning, they’ve been given six days advance notice — six days to figure out how to survive the flood.

Can they build “Noah’s Ark” in less than a week?

Noah says they don’t have to build anything — they already have an ark. They can survive underground in the hundreds of miles of the labyrinthine tunnels and chambers of Matheson Caverns — but they only have a few days to load three thousand people and supplies inside.

Then Paco shows up from California with an army to kill the Kentuckians and steal their refuge. As the battle between them rages, the flood shows up a day earlier than they’d calculated. Now it’s a desperate race against time. Star, Noah, and Papa Eagle Feather must fight their way through Paco and his armed killers, scrambling to get thousands of people underground as the water floods the valley below the caverns and begins to rise up toward the only entrance.

The Hidden is the third book in the new alien invasion series, The Taken Saga, by Avery Blake and Ninie Hammon. Get The Hidden and continue your new favorite science fiction series today!