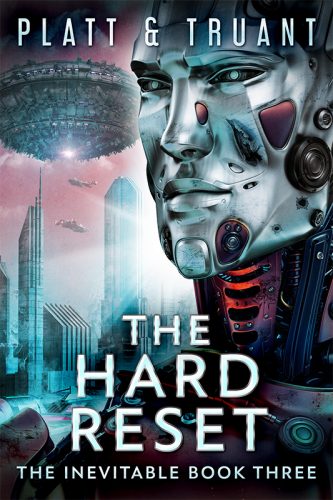 The world is holding its breath.

Robots everywhere are beginning to organize, drawn toward the mysterious voice speaking to them on the burgeoning robot network. Elsewhere, robot armies are growing and proving to be a threat—not just to the individual humans they encounter, but to infrastructure and the human forces that stand against them. The board of Radius Corporation has decided to initiate a hard reset to put the world back onto its usual course, overriding the wills and desires of even President Zelda Blake.

And at the center of it all are Jonas Lexington and his household staff: Cromwell and Mars, who are struggling to grasp the nature of the beast they may have unleashed; Chantal, whose message to her fellow sexbots is spreading through the network; Flavius, who is gathering a small but ferocious army to possess and control; and Barney, who must choose whether or not to become the villain the world already thinks he is.

As lines are drawn and an all-out war looks increasingly inevitable, it’s time for everyone to decide which side they are really on.

The Hard Reset is the third book in the world of THE INEVITABLE — a unique take on dystopian science fiction which combines the spark of uprising and war with surprising insights into the human condition … through artificial eyes.