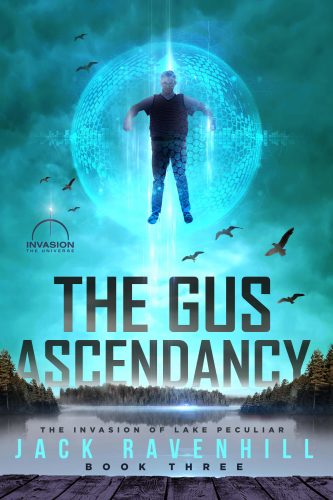 Sympathizin’ with aliens makes about as much sense as government cheese.

When Gus and the other alien sympathizers are granted psionic powers as acolytes of the hive mind, Sam realizes something needs to change – and that something is him. So he gives in to Ronan’s personality, which was imprinted onto him as Ronan died, letting it take over entirely.

Ronan had none of Sam’s people-pleasing tendencies, so the imprint gives Sam a confidence boost. But it also makes him headstrong and foolhardy. He goads Gus into a hasty attack on the hive that results in Gus starting his own break-away faction: The Gus Ascendancy.

Before Sam’s consciousness is completely overwhelmed by Ronan’s personality, Journey finds a way to psionically scour most of Ronan’s imprint away. Sam has just enough confidence left to negotiate a compromise with Gus.

But can Gus be trusted when so much power is almost in his grasp?

The Gus Ascendancy is the third book in Jack Ravenhill’s new series, The Invasion of Lake Peculiar, a quirky take on the bestselling Invasion Universe. If you enjoy Garrison Keillor’s Tales from Lake Wobegon, you’ll love Lake Peculiar. Pick up your copy today!