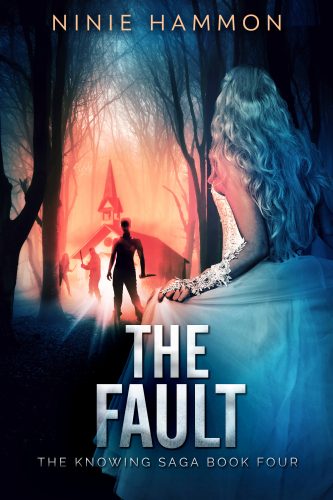 Sorceress of psychological suspense, Ninie Hammon, brings you the fourth book in The Knowing Saga, a sprawling tale of spiritual warfare that spans a quarter of a century. If you crave sleep-with-the-lights-on suspense coupled with characters so true they’ll feel like family, The Fault will open a world you won’t want to believe is real.

After defeating the prince of demons — a massive 50-foot tall efreet who they banished back to the depths of hell — Jack and Becca are getting married.

But as their friends and family gather in Caverna County to celebrate, their dream of an idyllic wedding in the woods is overrun by darkness. It’s cold, in July. The rainbow’s stripes are colored all wrong. Plants and animals… change. It’s almost as if the laws of nature no longer apply.

They thought they banished the hellish forces for good, but the ancient evil has found a way back.

Can Becca, Jack, and their rag-tag gang of all-too-human friends fight back against the demonic forces threatening to destroy their town, and after that, the world?

If you enjoy a fast-paced, chills-filled story so gripping you’ll decide the dirty dishes aren’t going anywhere and the car will survive one more day without an oil change, The Fault is the book for you.