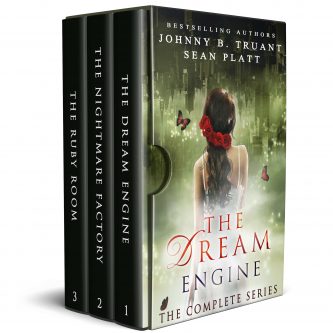 The Dream Engine: What is real, Eila? When Eila Doyle first hears the strange boy calling from somewhere deep in her sleep, she begins to question her sanity. In the gleaming steampunk world of Waldron’s Gate, citizens aren’t meant to dream.

The Nightmare Factory: After breaching the Fog and finding the ship beyond, Eila Doyle finds herself confronting a truth: her land of Alterra, contrary to what she’s been taught, isn’t alone — and Parliament, it seems, has been keeping yet another horrible secret.

The Ruby Room: With both Fleet and Flock in turmoil and conditions at the Ministry of Manifestation coming undone, Eila, Cora, and their small band of allies find themselves on the run, seeking a mysterious object that has the power to unravel all of Alterra.