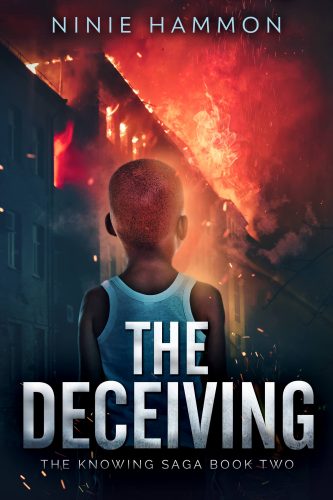 Sorceress of psychological suspense, Ninie Hammon, brings you the second book in The Knowing Saga, a sprawling tale of spiritual warfare that spans a quarter of a century. If you crave sleep-with-the-lights-on suspense coupled with characters so real they’ll feel like family, then you’ll love The Deceiving.

The monster demon is BACK!

…and he’s had twenty-six years to plot his revenge.

Defeated in 1985 by three twelve-year-olds, the efreet returns to kill them. In The Knowing, he sent five demon-possessed men to murder Jack Carpenter, Becca Hawkins and Daniel Burke—the now-adult twelve-year-olds whose memories of that childhood summer when they battled a monster have been erased. The three escape and survive—only to discover that the man possessed by the efreet has been nominated to fill a vacancy on the United States Supreme Court.

Now the efreet has changed his tactics. He’s no longer trying to kill them. Instead, he totally devastates their lives. And he has other plans, too, unspeakable plans, uglier than any of them could possibly imagine.

Award-winning journalist and author Ninie Hammon has created a terrifyingly real world where the people fighting to defeat invisible monsters from the bowels of hell are folks you might bump carts with in the grocery store.

People so ordinary, in fact, that when the unexplainable rips apart their lives, when demons destroy their reputations and attack their children, you begin to wonder if the same thing could happen to you, too.

★★★★★ “Once again, Ninie proves she has what it takes to stand toe to toe with the “big boys” and tell a spell binding story of good versus evil. Think there’s no such thing as ultimate evil..think again.” — Pembina

★★★★★ “Ninie, you broke the mold. This 2nd book in your trilogy outdid your first and I loved The Knowing. The Deceiving is like reading 2 stories in one. I started reading it and I was right back into the story from the start.” — D.A. Stephens

★★★★★ “I thought (The Knowing), book 1 in the series was a heart pounding read. I loved it, but let me be clear. Book 2, (The Deceiving) is so intense that I couldn’t relax while I was reading.” — Judith Blevins

★★★★★ “The most disappointing thing about Ninie’s most recent book, The Deceiving, is that it came to an end!” — CindyS

★★★★★ “The thing I always loved about Stephen King books was that he’d take a simple situation and all of a sudden you were somewhere in the middle of a mess that made you wonder how you got there. Ninie Hammon’s books are like that.” — Renee Alice

If you enjoy a fast-paced, chills-filled story so gripping you’ll decide the dirty dishes aren’t going anywhere and the car will survive one more day without an oil change, The Deceiving is the book for you.