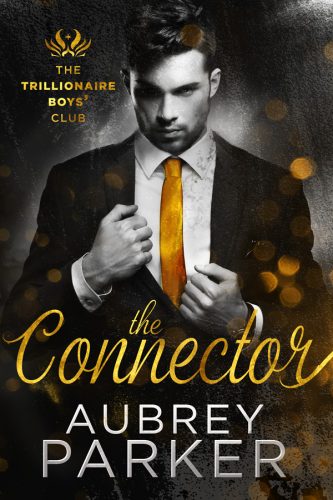 They say money can’t buy love. Fortunately, it can buy everything else.

A week ago, I didn’t know who Nathan Turner was. That’s because he doesn’t own deals; he makes them instead. He’s the man behind the curtain — more powerful even than the man in front of it.

He’s a multi-billion-dollar networker. A connector, in his own words.

Nathan’s job is to pull strings. And when I butted my way into his office, he told me he planned to pull my strings, too.

I thought I could make my own deal with Nathan, but now I’m in over my head.

What he’s connecting now isn’t a takeover or a buyout.

I think he’s forming a secret society instead: a Syndicate of billionaires who want to pool their assets into a trillion-dollar pool, then rule the world.

But there’s no way Nathan will let me out now.

The Connector is the first book in the Trillionaire Boys’ Club series by Aubrey Parker.  Each book tells the story of another of the Club’s powerful members … and you’re going to want to collect them all.