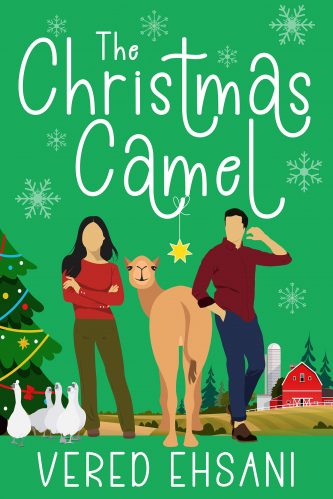 All you need is love… and a camel.

Mollie Stanton has no intention of ever returning home – until her boyfriend dumps her twelve days before Christmas, and her incorrigible grandmother, Duchess Delilah, calls from jail, asking Mollie to bail her out, along with her two best friends.

There’s just one small catch. The judge insists that Mollie be guarantor and guardian. Translation: if she wants to get out of town before New Year, she has to find out who framed Duchess Delilah. Ideally, while also avoiding the handsome but annoying vet who’s staying in the Stanton Farm’s guest cottage.

All Dr. Darren Little wants is a fresh start, free from his family’s political ambitions – and scandals. When he learns about a too-good-to-be-true opportunity to buy out another vet’s rural practice, he signs the contract. Looking after farm animals in a small town sounds like the perfect prescription for a much needed dose of calm, order, and sanity.

Problem is, there’s nothing calm, orderly, or sane about Teaville and its residents, whatever their species. And no one is crazier than Duchess Delilah. As for her granddaughter Mollie… she’s charming but guilty — and crazy — by association.

Neither Mollie nor Dr. Little have any idea what crazy looks like until Christmas Eve when Delilah’s shenanigans, a pregnant camel, and an altercation with the law conspire to rewrite more than just the doctor’s prescription.

Christmas Camel is a new TeaTime RomCom novel by Vered Ehsani, author of the Society for Paranormals, Wavily Witches, and the Pirates Ahoy cozy mystery series.