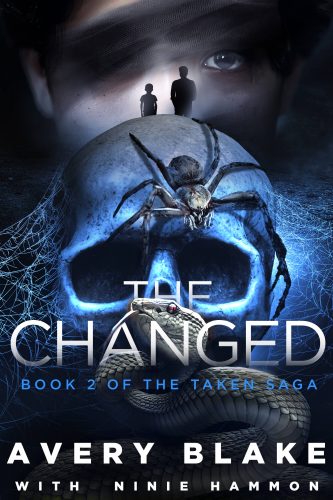 SciFi aficionado, Avery Blake, and sorceress of suspense, Ninie Hammon, team up to bring you The Changed. This is the second book in The Taken Saga, a terrifying tale of alien invasion told from the perspective of three very special young people.

In the last moment of their captivity on board the alien ship, Star, Noah, and Paco are made separate offers: they will be returned to earth, but they each must abandon the other two. Star and Noah refuse outright, but Paco … Does he believe the other two have already betrayed and abandoned him?

When the three are returned to the places they were abducted from, their ability to read minds begins to fade, but Paco struggles to hold on, trying to use his newfound mental power to dominate the prison inmates and get revenge on Spade. But is he damaging his own brain every time he wields his power?

Star and her grandfather attempt a perilous journey from New Mexico to Kentucky to find Noah because Star can’t stand being separated from him— but they are kidnapped and turned into slave labor for a warlord. There’s something special about Star now and when she is threatened, the other captives rise up to defend her. Are they strong enough to beat the kidnappers?

A few days after Noah is returned to Kentucky, an alien shuttle crashes near his hometown. The Astrals are injured and then attacked by a truck full of drunk humans. The Astrals retaliate, destroy the town and the survivors regroup in a monastery. A gang of outlaws attacks the monastery to steal their supplies. They have taken Noah hostage — will they actually hang him from the archway out front unless the survivors surrender?

Noah cries out to Star telepathically for help. She’s coming, trying to get there with an army … but will she get there in time?

The Changed is the second book in the new alien invasion series, The Taken Saga, by Avery Blake and Ninie Hammon. Get The Changed and continue your new favorite science fiction series today!