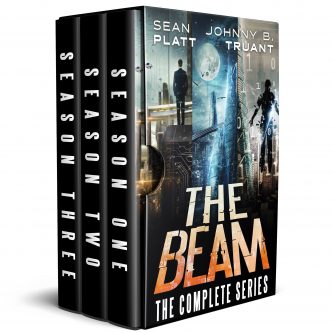 From the bestselling authors of the Invasion and Yesterday’s Gone series comes The Beam, a disturbing philosophical exploration of the future of our hyperconnected world. This chilling, intricately-plotted series is set in a futuristic dystopia where politics and technology have widened the gap between haves and have-nots.

When all of humanity is connected, the network is the true power.

In the year 2097, the only stable nation is the NAU: a dystopia exploding with new technologies and ruled by powerful, unchecked political parties.

Above it all is The Beam: an AI-built computer network that serves every whim and connects citizens through implants and biological add-ons. It permeates everything. It is everywhere.

But now the NAU’s power is shifting. New powers are making their moves while others hang in the balance.

Truant and Platt deliver deep political intrigue and incisive social commentary along with a generous helping of big philosophical themes through engaging, multifaceted characters and rich worldbuilding. If you enjoyed Altered Carbon and The Fifth Element, you’ll feel right at home in the world of The Beam.