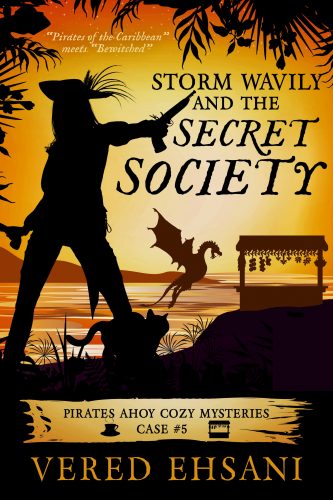 Victorian water witch and pirate-in-training Storm is used to all manner of inconveniences, from bloodsucking fireflies to boat-breaking waves. But running out of tealeaves is unacceptable. When the crew of The Pink Pearl are given beach leave, Storm heads for Mombasa’s market to stock up on that essential commodity.

However, all plans for a well-deserved shopping trip are thrown into disarray when a dragon attacks the town, an Elf is accidentally abducted, and a stranger asks for help. It’s all hands on deck to find the kidnappers, steal back an artifact, and replenish the tea stash. But appearances are deceiving, and Storm’s past and future are about to collide.

Armed with a wicked glare, a cunning cat, and a crew of pirates, Storm faces her greatest challenge and her most dangerous mystery yet. Will they solve the case before the next high tide washes away all clues?

★★★★★ “This book has soo many twists and turns (and I don’t mean in the streets of the city) that I had no idea where it was going to end. From beginning to end the author gave us a story that is unforgettable. Thank you for all the adventures and I can’t wait to read the next tale from Vered Ehsani.” — Kathleen

★★★★★ “This hilarious fictitious episode to the series stands alone. However, to really enjoy it, I recommend that you read the previous books. Also, there are some interesting historical facts that Vered Eshani has expertly woven into the story, along with some strange and surprising cultural myths of the indigenous people of the location that’s featured. I can’t wait for Storm’s next adventure.” — Rural Reader

★★★★★ “Well, evidently the last book in the series. I hope not, but we can continue along with the Wavily Witch books where we meet Storm’s Granddaughter. Hopefully, we’ll have some books on Storm’s daughter and what happened. Hint Hint!” — Sierraflower

Storm Wavily and the Secret Society is the fifth case in the Pirates Ahoy Cozy Mystery series. Get ready to sail around the African continent and into murder, mayhem, and other misadventures.