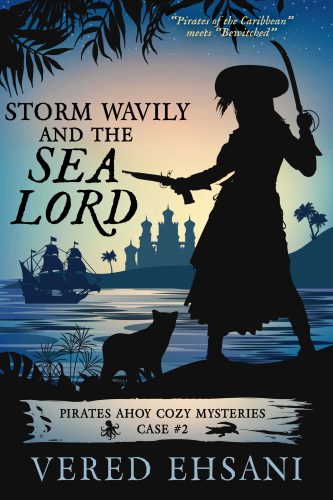 Get a wave from it all.

Miss Storm of the Wavily Witch Clan is settling into her new life as a pirate. All’s going as well as can be expected until The Pink Pearl and its crew encounter a cyclone that threatens to destroy them. The safety provided by a nearby harbor proves temporary when Storm and her fellow pirates are caught up in a murder investigation.

Trapped inside a palace with a pirate-hunting admiral, a long list of suspects, and an ambitious murderer, Storm has to take up the role of amateur sleuth once again. But politics are complicated, clues are scarce, the palace is huge, and — as the talking cat reminds her — it’s a dark and stormy night.

Armed with a hatched egg, a hungry cat, and a few spells, Storm sets out to solve the murder without getting arrested. Can she catch the culprit before disaster and Pooky’s hunger pangs strike again?

★★★★★ “More dangers to avoid, mysteries to solve, and fun to be had, for Storm, Pooky, and a new arrival. The plot thickens for Storm’s life on the run, as well. Another great adventure, on and off the high seas. Highly recommended.” — CJ

★★★★★ “Storm Wavily and the Sea Lord by Vered Ehsani is a delightful read. I love the characters, even the cat, and the story is filled with humorous situations and snarky dialogue. I look forward to reading Storm’s next adventure on the high seas.” — Rural Reader

★★★★★ “Another book about Ms. Storm! I love learning more about characters from other books and this one doesn’t disappoint. Once again Storm is caught between a rock and a hard place! (Where DID that phrase ever come from?!!!)” — Sierraflower

★★★★★ “If you don’t subscribe to Vered’s news letter you are missing out. She has great stories, beyond her books, about her life and travels. All her books are awesome, this one didn’t disappoint.” — Linda B

Storm Wavily and the Sea Lord is the second case in the Pirates Ahoy Cozy Mystery series. Get ready to sail around the African continent and into murder, mayhem, and other misadventures.