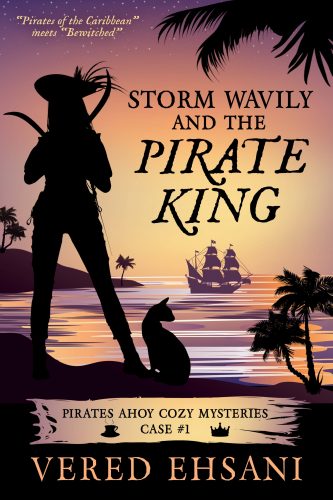 Be witched on a pirate ship.

Storm Puddlewick of the Wavily Witch Clan didn’t mean to stow away on a pirate ship, and she certainly didn’t intend to steal a talking cat. However, it’s too late for regrets when the crew of The Pink Pearl captures her and takes her to Treasure Island.

It’s the fifty-seventh pirate parlay, and the current Pirate King is determined to keep his throne. But when someone breaks the peace pact, a murder throws the event into disarray. With his reputation on the line, the king orders Storm to solve the murder or walk the plank.

Armed with a chicken egg, a snobby cat, and a few spells, Storm will need all her wits to solve the murder in time to help the king and save the peace. But with the stakes so high, it’s only a matter of time before the murderer comes after her.

★★★★★ “I was sucked right in, which in my opinion is the best review I can give. This is essentially the backstory of Evian’s grandmother, a stern, powerful Water Witch, who appears to be very inflexible and unreasonable to Evian (Wavily Witches). But behind every grownup, there is a young person. This is young Storm Wavily’s story, and it is every bit as entertaining and well written as the other books by this author!” — Cleargrace

★★★★★ “I have been a fan of Vered Ehsani for a long time now and her books keep getting better and better. I can’t wait to read the next installment of Storm Wavily. Maybe someone should get a copy of these misadventures sent off to Evian. Bet she would like to hear them.” — Kathleen

★★★★★ “Storm Wavily’s early days when she was a pirate, of all things, is full of adventure and a mystery, of course. Now we know where her granddaughter Evian gets her mettle, and her love of a good mystery. Oh, and her affinity for self-important familiars with insatiable hunger. Quirky characters, danger, and fun on the high seas. Highly recommended.” – CJ

★★★★★ “I have read Vered Ehsani’s books for a number of years, and have a special like for her mellow blend of magic, mystery, and life. I enjoyed reading about Storm’s granddaughter and this new series giving Storm’s backstory promises to be rich in its’ own right. This new work, as usual, is well written and holds interest as well. I won’t give the story away but I will say this: if you like cozies, mystery, murder, and magic- BUY THIS BOOK! You’ll find yourself with an enjoyable new author.” — E. & J. Roberts

Storm Wavily and the Pirate King is the first case in the Pirates Ahoy Cozy Mystery Series. Get ready to sail around the African continent and into murder, mayhem, and other misadventures.