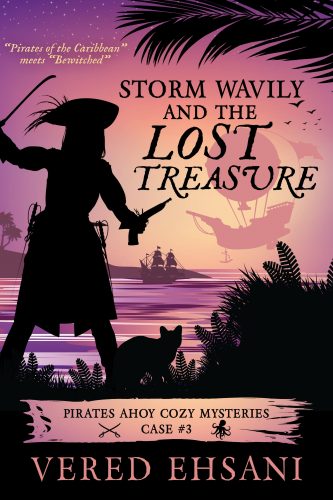 A pirate’s life isn’t always easy, but it has its perks. Being chased by Queen Victoria’s Royal Navy isn’t one of them.

Having barely escaped a watery fate, Miss Storm and her fellow pirates are hired to find a ship that wasn’t so lucky. The hunt for the lost treasure takes them around the Cape of Good Hope and into a mystery that proves more dangerous than the Navy’s cannons. What starts as a quick day trip rapidly disintegrates into a series of murders, missing evidence, and walking corpses. It’s all fun and games until someone loses a ship. Or a life.

Armed with a baby crocodile, a somewhat faithful cat, and a ghost-summoning spell, Storm sets out to solve the mystery, save her ship, and find the treasure. But where there’s treasure, there are hunters. Will The Pink Pearl’s crew be next on the hunters’ list?

★★★★★ “What a delightful story! I am pleased and amused by Vered Ehsani’s wild imagination and story-telling abilities. This pirates tale is a storybook treasure for adults. There is magic, mayhem, treasure and a sassy cat, not to mention the fireflies. Well written and imaginative!” — Rhonda Holle

★★★★★ “As always, Wow. I am never disappointed, always enthralled. Having heard the tales of Storm Wavily via her granddaughter Evian, I always wondered how much was truth and how much fiction. Yep, here’s the answer. Have fun, I sure did.” — Kathleen

★★★★★ “Love this series! Brings excitement and intrigue, but its not a heavy to read book. Enjoy the characters and situations!” — Sierraflower

★★★★★ “Loved all the excitement and the wow factor of the story. Made me laugh a lot at the witsome remarks made by various characters. The mystery was fantastic and made me try to guess who the person was and I was only right a bit.” — Athena Brown

Storm Wavily and the Lost Treasure is the third case in the Pirates Ahoy Cozy Mystery series. Get ready to sail around the African continent and into murder, mayhem, and other misadventures.