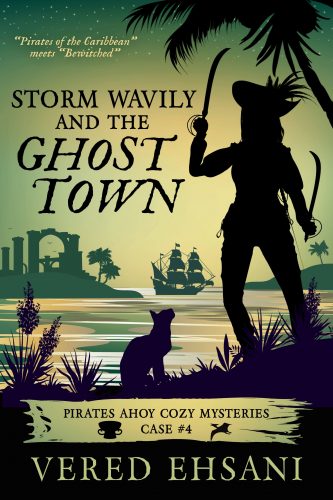 Signing The Pink Pearl’s Pirate Codex was supposed to be water witch Storm’s ticket to freedom. But that was before discovering her ex-fiancé’s spell book on board the ship.

Before she can solve that pesky mystery, Santa hires the crew to transport one of his elves to East Africa. The mission: collect a valuable artifact from the ruins of Gedi. The problem: Gedi’s haunted. Something — or someone — really doesn’t like strangers, and there’s nothing stranger than Storm and her fellow pirates. People start disappearing faster than the cream in her cat’s bowl.

Armed with a growing crocodile, a divinely inspired cat (or so he says), and a healthy dash of skepticism, Storm is determined to stop the body-snatching ghosts. Can she figure out an exorcism spell before they come after her crew?

★★★★★ “I am enjoying the funny and witty series and this one was no exception. Storm Wavily is one unique character that stands up to the challenges given to her even though at times she is not sure of herself.” — Athena Brown

★★★★★ “As Storm’s misadventures continue, what begins as a simple job turns into anything but simple. Oh, and did I mention the creepy and dangerous jungle, the strange natives and the sand that keeps getting under Pooky’s claws. All of which combine to make for a rollicking and entertaining belly-laugh read by Vered Ehsani.” — Rural Reader

★★★★★ “Vered Ersani has written another great pirate witch adventure. Captain Trickys crew must do the impossible again. And they have only one day.” — slpsharon

★★★★★ “Wow, these just get better and better! Ms. Ehsani knows how to keep us hooked. In this one the crew is asked to get an artifact for Santa. Problem is the Elf that was sent doesn’t quite know the what or how of it!” — Sierraflower

Storm Wavily and the Ghost Town is the fourth case in the Pirates Ahoy Cozy Mystery series. Get ready to sail around the African continent and into murder, mayhem, and other misadventures.