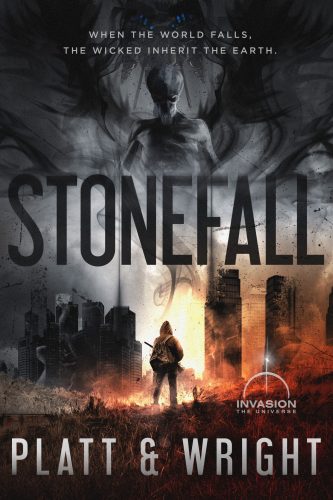 From the bestselling authors of Yesterday’s Gone, WhiteSpace, and The Karma Police series, comes an alien invasion series written in the Platt and Truant Invasion Universe.

The meek will never inherit the Earth…

Eamon Quinn once had a good life. A loving wife. A child on the way. Then came the aliens – and everything changed.

Now, engulfed in a world of violence and decay with allies in short supply, Eamon will do anything to protect his strange and miraculous son from the criminals and aliens who would use him for their own ends.

Gleeson Crowe is sure that it was God who spared him when the aliens destroyed Stonefall. Now he’s on a mission to rebuild the former prison into a haven to shield the righteous. Maybe Eamon’s son can help him do it. If not, the world will be waiting to die.

As civilization falls, one question remains: How wicked must the righteous become?

★★★★★ “A book that you’ll hate to love. Death , triumph , love , hate and anguish. A book loaded with despair, pursuit and horror running hand in hand. The end of world that doesn’t end with a whimper.” — Gerry

★★★★★ “This book continues the amazing Invasion universe with another entry that’s full of violence and can’t put it down action. I loved this book and can’t wait for the next entry. I can’t even imagine the amount of stories that are yet to come.” — B. DeAug

★★★★★ “This is another instalment in the awesome INVASION series of books by Sean Platt and Johnny Truant or David Wright (they buddy up to write these great books). Stonefall is the first in a series of three books by Sean and David, and it doesn’t disappoint.” — DBStevens

★★★★★ “I love this new book that takes place in the ‘Invasion’ world! I flew through the first one and I can’t wait for the next one.” — SLE

★★★★★ “I really hated finishing the last book in the Invasion Series; it’s one of my favorites (well, besides Yesterday’s Gone!)…and now, there’s SO much more!! Best idea ever to tell parallel (though not related) stories occurring simultaneously, all under the “umbrella” of the alien invasion from the original series! This is NOT a prequel or sequel; this is a standalone series set in the same timeframe, experiencing the same invasion.” — WordBird

Stonefall is the first book in Platt & Wright’s new series set in the bestselling Invasion Universe. Fans of The Walking Dead and The Road will love this unflinching look at the devastating aftermath of an alien invasion.