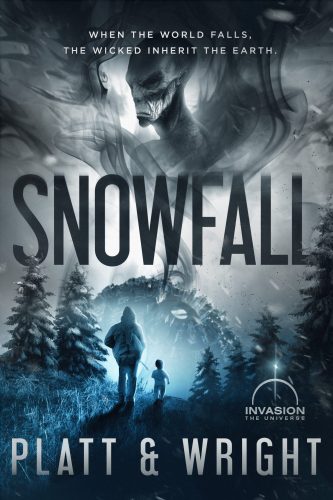 From the bestselling authors of Yesterday’s Gone, WhiteSpace, and The Karma Police series, comes an alien invasion series written in the Platt and Truant Invasion Universe.

Sometimes violence IS the best way…

Gleeson Crowe has found his prize: the miraculous child who can heal the sick and build his ministry to protect the righteous and judge the wicked, and he’s not about to give the child up, even to Eamon who has come for his son.

But Gleeson is blind to those inside Stonefall who would betray him for their own purposes.

★★★★★ “Another great entry in the invasion universe. I flew through this book quicker than stonefall and I can’t wait to get my hands on downfall. I was worried at first that the quality of stories would take a hit with new authors taking a stab at the invasion universe, but that isn’t the case.” — B. DeAug

★★★★★ “I love this second installment of the Stonefall series. As an avid fan of the Invasion series, I was skeptical about any new series that was derived from Invasion. So far, Stonefall, and subsequently Snowfall, has lived up to my expectations. I found this book hard to put down, and it proved a story travel companion!” — TRheams

★★★★★ “I love the pace and flow of these stories! Though I really liked Stonefall, so far, Snowfall is my favorite, and I’m on pins and needles waiting for Downfall! Platt and Wright have such awesome writing chemistry, with fast paced action that starts immediately, and does not let up at all, and characters that are so well developed I feel like I know them! It’s so easy to open one of their books, and totally disappear into that world.” — WordBird

★★★★★ “This book isn’t for the faint of heart. But it’s totally enjoyable and continues to expand on the world beset by aliens that was first introduced in the Invasion series. A must-read if you like this genre of sci fi.” — DBStevens

★★★★★ “This is the second of 3 and I actually enjoyed this one more! I loved the first book, but some of the violence was off-putting. This book isn’t violence-free (at all) but it is slightly less graphic (or at least it struck me that way). The action never stopped and there were lots of twisty story lines! I can’t wait for the final book!” — SLE

Snowfall is the second book in Sean Platt and David Wright’s Stonefall Trilogy, set in the bestselling Invasion Universe. If you enjoy watching the world crumble and the survivors struggle to survive, pick up your copy today.