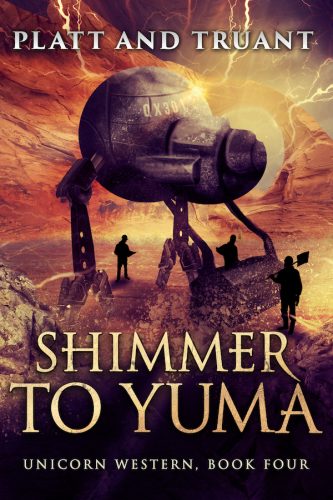 From the bestselling authors of Yesterday’s Gone, The Inevitable, Invasion, and Fat Vampire comes Shimmer To Yuma: Unicorn Western Book Four, a reinvention of both the western genre and unicorn lore.

On their way to intercept Dharma Kold before he finds the deadly third Orb — and to finally free the captive Mai — Clint and Edward come across a botched Realm operation, where a shotgun-wielding bandit leads his gang to rob an exposed magic vein.

Assisting the authorities who exiled him isn’t something that Clint is eager to do, but that changes when he learns that helping to escort the bandit to justice might finally mean finding an open doorway back to The Realm…

★★★★★ “this story keeps getting more epic and awesome with each passing book. What I especially liked in this one was the addition of some great new characters who I instantly liked. Also, like some other reviewers have written, this book has a really great ending.” — Buddy Gott

★★★★★ “Johnny B. Truant and Sean Platt have built a wonderful world where an unicorn and a Marshall can make a difference. The jokes, getting better with each book, are like steak sauce on a $50.00 New York Strip. You don’t need it, but the extra flavor, now and again, is a delight.” — Brian D. Meeks

★★★★★ “Plenty of action, the promise of chili, ropes and restraints…and one very confused unicorn. This series is shaping up nicely and still holding plenty of tension – along with a few surprises, too.” — Demelza Carlton

★★★★★ “This was a great continuation of the story; it was fun to see how Clint manages to work through his life without the help of Edward (the unicorn) who normally is able to solve most of his problems for him. The last couple of paragraphs of the story caught me completely by surprise, and now I can’t wait for Unicorn Western 5!” — Erin M.